The earliest surviving examples of Chinese painted artwork date to the Warring States Period (481–221 BC), with paintings on silk or tomb murals on rock, brick, or stone. They were often in simplistic stylized format and in more-or-less rudimentary geometric patterns. They often depicted mythological creatures, domestic scenes, labor scenes, or palatial scenes filled with officials at court. Artwork during this period and the subsequent Qin Dynasty (221–207 BC) and Han Dynasty (202 BC – 220 AD) was made not as a means in and of itself or for higher personal expression; rather artwork was created to symbolize and honor funerary rites, representations of mythological deities or spirits of ancestors, etc. Paintings on silk of court officials and domestic scenes could be found during the Han Dynasty, along with scenes of men hunting on horseback or partaking in military parade. There was also painting on three dimensional works of art like figurines and statues, such as the original-painted colors covering the soldier and horse statues of the Terracotta Army. During the social and cultural climate of the ancient Eastern Jin Dynasty (316 – 420 AD) based at Nanjing in the south, painting became one of the official pastimes of Confucian-taught bureaucratic officials and aristocrats (along with music played by the guqin zither, writing fanciful calligraphy, and writing and reciting of poetry). Painting became a common form of artistic self-expression, and during this period painters at court or amongst elite social circuits were judged and ranked by their peers.

The establishment of classical Chinese landscape painting is accredited largely to the Eastern Jin Dynasty artist Gu Kaizhi (344 – 406 AD), one of the most famous artists of Chinese history. Like the elongated scroll scenes of Kaizhi, Tang dynasty (618–907 AD) Chinese artists like Wu Daozi painted vivid and highly detailed artwork on long horizontal handscrolls (which were very popular during the Tang), such as his Eighty Seven Celestial People. Painted artwork during the Tang period pertained the effects of an idealized landscape environment, with sparse numbers of objects, persons, or amount of activity, as well as monochromatic in nature (example: the murals of Price Yide’s tomb in the Qianling Mausoleum). There were also figures such as early Tang-era painter Zhan Ziqian, who painted superb landscape paintings that were well ahead of his day in portrayal of realism. However, landscape art did not reach greater level of maturity and realism in general until the Five Dynasties and Ten Kingdoms period (907–960 AD). During this time, there were exceptional landscape painters like Dong Yuan (refer to this article for an example of his artwork), and those who painted more vivid and realistic depictions of domestic scenes, like Gu Hongzhong and his Night Revels of Han Xizai. 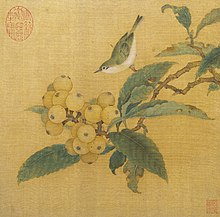 During the Chinese Song dynasty (960–1279 AD), not only landscape art was improved upon, but portrait painting became more standardized and sophisticated than before (for example, refer to Emperor Huizong of Song), and reached its classical age maturity during the Ming Dynasty (1368–1644 AD). During the late 13th century and first half of the 14th century, Chinese under the Mongol-controlled Yuan Dynasty were not allowed to enter higher posts of government (reserved for Mongols or other ethnic groups from Central Asia), and the Imperial examination was ceased for the time being. Many Confucian-educated Chinese who now lacked profession turned to the arts of painting and theatre instead, as the Yuan period became one of the most vibrant and abundant eras for Chinese artwork. An example of such would be Qian Xuan (1235–1305 AD), who was an official of the Song dynasty, but out of patriotism, refused to serve the Yuan court and dedicated himself to painting. Examples of superb art from this period include the rich and detailed painted murals of the Yongle Palace,[22][23] or “Dachunyang Longevity Palace”, of 1262 AD, a UNESCO World Heritage site. Within the palace, paintings cover an area of more than 1000 square meters, and hold mostly Daoist themes. It was during the Song dynasty that painters would also gather in social clubs or meetings to discuss their art or others’ artwork, the praising of which often led to persuasions to trade and sell precious works of art. However, there were also many harsh critics of others art as well, showing the difference in style and taste amongst different painters. In 1088 AD, the polymath scientist and statesman Shen Kuo once wrote of the artwork of one Li Cheng, who he criticized as follows:

…Then there was Li Cheng, who when he depicted pavilions and lodges amidst mountains, storeyed buildings, pagodas and the like, always used to paint the eaves as seen from below. His idea was that ‘one should look upwards from underneath, just as a man standing on level ground and looking up at the eaves of a pagoda can see its rafters and its cantilever eave rafters’. This is all wrong. In general the proper way of painting a landscape is to see the small from the viewpoint of the large…just as one looks at artificial mountains in gardens (as one walks about). If one applies (Li’s method) to the painting of real mountains, looking up at them from below, one can only see one profile at a time, and not the wealth of their multitudinous slopes and profiles, to say nothing of all that is going on in the valleys and canyons, and in the lanes and courtyards with their dwellings and houses. If we stand to the east of a mountain its western parts would be on the vanishing boundary of far-off distance, and vice versa. Surely this could not be called a successful painting? Mr. Li did not understand the principle of ‘seeing the small from the viewpoint of the large’. He was certainly marvelous at diminishing accurately heights and distances, but should one attach such importance to the angles and corners of buildings?[24] 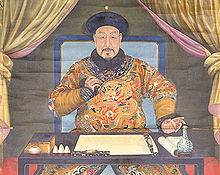 Although high level of stylization, mystical appeal, and surreal elegance were often preferred over realism (such as in shan shui style), beginning with the medieval Song dynasty there were many Chinese painters then and afterwards who depicted scenes of nature that were vividly real. Later Ming Dynasty artists would take after this Song dynasty emphasis for intricate detail and realism on objects in nature, especially in depictions of animals (such as ducks, swans, sparrows, tigers, etc.) amongst patches of brightly colored flowers and thickets of brush and wood (a good example would be the anonymous Ming Dynasty painting Birds and Plum Blossoms,[25] housed in the Freer Gallery of the Smithsonian Museum in Washington, D.C.). There were many renowned Ming Dynasty artists; Qiu Ying is an excellent example of a paramount Ming era painter (famous even in his own day), utilizing in his artwork domestic scenes, bustling palatial scenes, and nature scenes of river valleys and steeped mountains shrouded in mist and swirling clouds. During the Ming Dynasty there were also different and rivaling schools of art associated with painting, such as the Wu School and the Zhe School.

Classical Chinese painting continued on into the early modern Qing Dynasty, with highly realistic portrait paintings like seen in the late Ming Dynasty of the early 17th century. The portraits of Kangxi Emperor, Yongzheng Emperor, and Qianlong Emperor are excellent examples of realistic Chinese portrait painting. During the Qianlong reign period and the continuing 19th century, European Baroque styles of painting had noticeable influence on Chinese portrait paintings, especially with painted visual effects of lighting and shading. Likewise, East Asian paintings and other works of art (such as porcelain and lacquerware) were highly prized in Europe since initial contact in the 16th century. Homeowners want to spend a lot more time in their outdoor spaces today and,... Although hunting season may still be a couple of months away, now is the... The Romanian Revolution of 1989